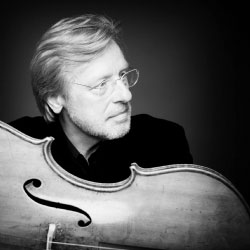 Swedish cellist Frans Helmerson studied in Göteborg, Rome and London with G.Vecchi, G. Selmi and W. Pleeth, as well as having had the benefit of the guidance and support from M. Rostropovitch.

Helmerson’s love for chamber music led him to take the position as artistic director of the Korsholm Festival in Finland 1994-2001, and he is frequently appearing at a number of international festivals, such as in Verbier, Prades, Naantali, Kuhmo and Ravinia. In 2002 he formed the Michelangelo String Quartet with Mihaela Martin, Stephan Picard and Nobuko Imai.

Frans Helmerson has recorded concertos by Dvorak and Shostakovich, the Brahms Double Concerto with violinist Mihaela Martin and the Bach Solo Suites among others.